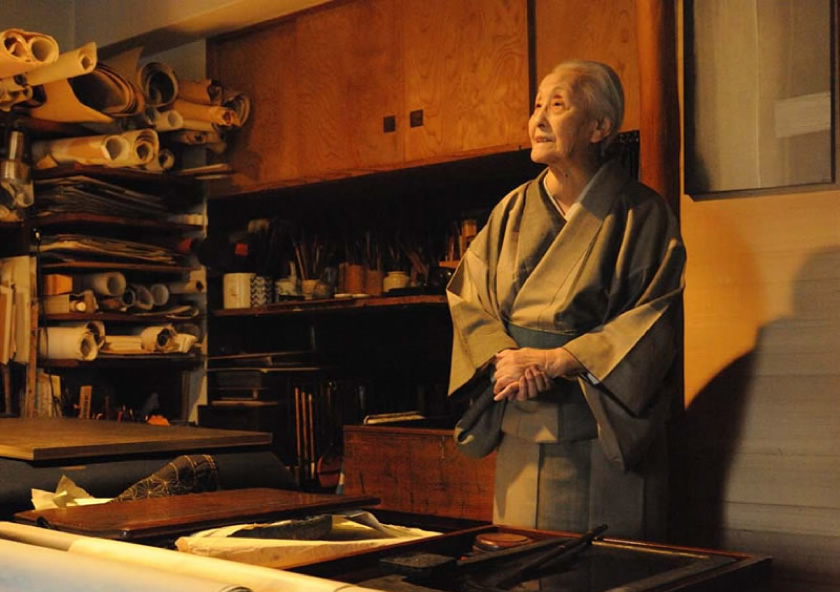 Toko Shinoda was born in Dalian, China in 1913. From the age of six she learned the basics of writing with a brush from her scholar father, but thereafter her mastery of calligraphy was self acquired After the end of World War II, Shinoda began to create abstract works based on the anatomy of Japanese characters. In 1956 she traveled to the United States and took up residence in New York, holding solo exhibits in Boston, Chicago, Paris, Cincinnati, and elsewhere. After returning to Japan in 1958, she undertook works ranging over various genres: wall paintings, mural calligraphy, and reliefs for buildings, the fusuma panels for the Zojoji Temple main hall in Shiba, Tokyo, book design, title lettering, and essay writing. The powerful and intense style of her works of the 1950s gradually acquired grace and lyricism, and from the 1980s to 1990s, her composition of line and space grew increasingly refined. In recent years, her lines and surfaces draw together, her reds are magnificent, her blacks quiet and keen or reserved and complex.

In 2005, Toko Shinoda was selected among the “100 Japanese People the World Respects” by Newsweek (Japanese edition). In that year—she was in her early 90s—she produced a painting over five meters tall. Her vigor as an artist seems unabated.