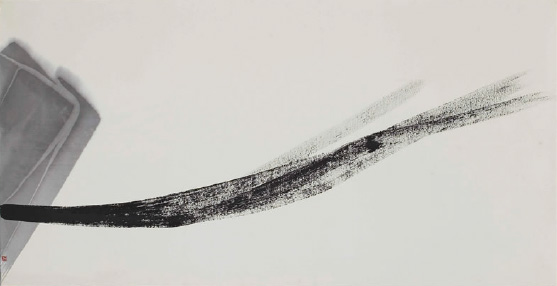 Thinned sumi readily penetrates washi paper, and forms emerge with the mingling of water and sumi. The moment the brush touches paper the latent power of the sumi is released as water spreads the ink beyond the intentions of the artist. Light movements of the brush quietly emerge in figures of water and sumi. One of the important attractions of Shinoda’s ink painting is her tanboku (“light sumi”) works made with sumi diluted with plenty of water.

The abstract lines and shapes of Shinoda’s works have been rid of everything that could be considered extraneous. The same is true of the “color of sumi” itself. As written in China’s ancient calligraphy manual, the Hippoki (Ch. Bifaji; Record on the Art of the Brush), the black of sumi—gen (Ch. xuan)—is a step away from true black; it embodies the essence of all things and the basis of all colors. There are countless colors in this world, but the blackness of sumi is a color that reveals all shades of color within it. The richness and depth of that color has a mystique that can express all things—it can be the irreplaceable means of expression no other color can match.

While in the United States, Shinoda’s abstract works created with sumi and brush on washi paper were applauded for having developed the traditional calligraphy of ancient times into abstract linear forms rich with original imagination, forms with delicate, shaded lines evoking natural trees, flowers, and grasses. With this recognition of her work not just in the framework of traditional arts of the East but as legitimate abstract art, Shinoda gained great confidence in her endeavor to evolve new forms from within herself.

The experience gave Shinoda more than just the confidence to pursue her own new style, however. She also grasped how indispensable was sumi to her art and gained renewed appreciation for the way Japan’s moist climate brought out the limitless qualities inherent in sumi. Released in water, sumi flashes back to life, runs freely over the paper, blurs, and deepens. Before her trip to the United States, her works had featured organic, curvaceous lines growing out of the forms of ideographic characters filling the entire canvas. After she returned to Japan, as if taking pleasure in the discoveries she had made abroad, her works shifted to expanses of thick, overlapping tanboku strokes, burgeoning and moist blurring, and harmonies of sumi’s kaleidoscopic shades created from the slightest movements of a brush. In the quietly delicate, swelling movements of her suiboku paintings we can see the subtle attentions of the artist and the bountiful energy latent in the sumi.

The slightest shade of feeling can be rendered in the form of water on the surface of the paper. Water is a mirror that reflects the heart of the artist. Shinoda realized that sumi is in a sense alive. Dark sumi more or less follows the intentions of the artist, while with the addition of water sumi reveals countless shades and through the workings of inherently shapeless water, it shifts its shape. Water dropped upon a surface is free and unresisting, making it all the more difficult to simply drip it. Fascinated by that difficult-to-control quality of water, she places her prayers in the uncontrollability of water and entrusts her art to it. All hues are in sumi, but through water, over which the artist has no control, the shades of sumi can reflect the heart and acquire infinite depth.

Shinoda practices her ink painting beyond the boundaries of the world of traditional calligraphy, continuing her personal odyssey into abstract expression. Her dark sumi strokes, asserting a noble presence that overlaps with Shinoda’s own consistent attachment to her personal style, are awe-inspiring. But perhaps even more remarkable are her light sumi strokes, tanboku, with their limitless overtones expressed through the movement of water, revealing glimpses of the subtlety of Shinoda’s mind as a suiboku artist. Attentive and aware of what is changing and shifting in daily life, she makes her ink and wields her brush. Sensitively responding to both nature and artifice, sumi absorbing water shows sometimes-surprising facets. This is a metaphor for Shinoda’s own daily life and shows how sentiments appear as shapes and lines on paper. Though she has moved away from the framework of calligraphy she has not abandoned sumi. Even today at the age of 100, through the layering of thinned ink she reaches for yugen—ineffable beauty.