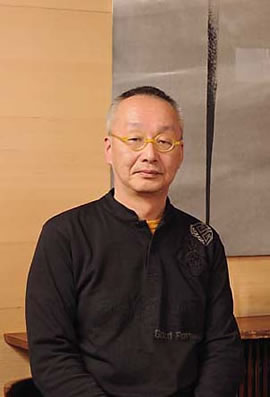 Near the approach to the Seki Garden of the Nabeya Bi-Tech Kaisha (NBK) stands the huge cylindrical building in exposed concrete. The building was completed in 1993, initially as a hall for listening to music. Later, it has assumed an additional function as a museum for works by Toko Shinoda as its main collection.
The main approach to the hall is a slope that widens toward the hall, which rises up against a landscape of mountains that stretch through the central part of Gifu prefecture. Upon entering the small entrance, one sees the hall’s main floor in dim light at the lower left. You slowly spiral down toward it. On the main floor are large partitioning screens—used for display of art works—lined up in various configurations and illuminated as if in the light reflected off snow. When concerts are held in the hall, the screens are removed and placed beside the walls, and the musicians perform with the water of the pool as their backdrop. Beyond the pool is the spacious office building of NBK. The office building has a lightweight, horizontal feel, whereas the hall is vertical and weighty—the two seem engaged in a dialogue across the pond.

Hidetoshi Ono, professor of the University of Tokyo; architect
Ono is the designer of the office building, the hall, and the partitioning screens for display of exhibits.